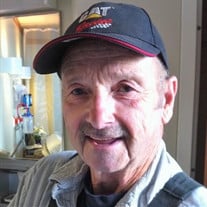 On August 8th, 2021, we said goodbye to Douglas “Bud” Franklin Sr. Bud passed away at the age of 81 after a battle with a number of health conditions. He was born on September 2nd, 1939 to Doris Theresa (Price) and Wiley Wallace Franklin. Bud was the middle child, sandwiched between two sisters. Bud was born in Tacoma, Washington. He was a student of the Tacoma School District and attended Manitou Elementary, Gray Junior High, and Lincoln High School. Bud served in the United States Army and worked as a welder at Atlas Foundry in the 1960s. After losing his father as a teenager, Bud took on many jobs around the Tacoma and Lakewood area to help support his mother and sisters. During the rare times that he allowed himself free time, he enjoyed riding horses, ice skating and tinkering on any type of mechanical equipment he could get his hands on. Bud was proud to be independent and was self-employed for the majority of his life. He owned/operated his own steel fabrication shop and topsoil business. He also operated his own gyppo logging outfit and land clearing/demolition business. Bud had a sharp mind and was a fantastic designer of attachments for heavy equipment, such as: clearing rakes, stump splitters, thumbs for backhoes, and topsoil screening plants. He often modified or built his own equipment to accomplish the task at hand. In addition to his work, he enjoyed spending time with family and friends. One of Bud’s favorite things to do was to catch up with old friends and his brother-in-law over breakfast at Shari’s, The Thunderbird, and The Sherwood Inn. Bud was always willing to put up a fight when it came to his loved ones and the things he cared about. Bud’s nieces and nephews will remember him for his mischievous sense of humor and kind heart. Bud was preceded in death by his parents; his older sister and her husband, Alice and Rick Dougherty; and his stepson, Paul “Eddie” Turner. He is survived by his younger sister and her husband, Doris and Leonard Fisher; his daughter and son-in-law, Kim Mowery-Reams and Steve Reams; his son, Tim Mowery; his stepdaughter and her husband, Richele and Nick Pogreba; his son and daughter-in-law, Douglas and Angela Franklin; and his grandchildren, great grandchildren and many nieces and nephews. We would like to thank the nurses and doctors at UW Medical Center and Kindred Hospital for the excellent care they provided to Bud during the last six weeks of his life.

The family of Douglas "Bud" Franklin Sr. created this Life Tributes page to make it easy to share your memories.

Send flowers to the Franklin family.