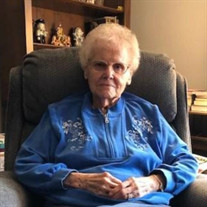 Dorothy Elizabeth Mize was born August 29, 1925 in Salisbury, North Carolina and was the youngest of nine children. Her father, John, was a carpenter and mother, Alice, a homemaker. Having only brothers close her age, Dorothy was a rough and tumbled kid, making sure she competed and excelled in everything her brothers did. As a teenager she fell in love with William Haskell Anderson. After his return from serving in Europe during World War II, they married February 14, 1947. In 1950, I, Karen, was born, 1952, my sister Joan. In 1957, Mom and Dad packed whatever belongings they could fit into their 1953 Buick and my sister and me and we headed to Lakewood, Washington in pursuit of a better future. In 1961 we moved into our home where they remained their entire lives. In 1967, they had my youngest sister, Joël. Mom was 42 when she started over with a newborn, keeping her young, younger than most her age. Mom lived a full yet simple life. She had a brief period of employment with JC Penney located in the Villa Plaza which is now the Lakewood Towne Center but mostly followed in her mother’s footsteps as a homemaker. She found happiness raising my sisters and me and in regular camping excursions and road trips. Mom enjoyed hitting the casinos and always headed for the pull tab machine when she saw one. She and Dad were avid Canasta, Pinochle and Poker players and regularly joined others for hours of fun. Dad preceded Mom in death by seven years. She took pride being his primary care giver for the last two years of his life. She remained in the home they made together with Joël joining her a year after Dad’s death. Joël’s constant and tender care allowed Mom to live her long life in the home that meant so much. Thanks to Mom’s good health and active life she lived 96 years always wanting to talk about what was in the news and debating politics. Late afternoon December 31, 2021, Joël and I were with Mom when she left this earth to join Dad, her parents, brothers, sisters, friends and our God. We wish to acknowledge and sincerely thank Gina and Ann from Careage Home Health and Aunteana and Chelsea from Home Instead for their skilled support and compassion while helping care for our Mother, the West Pierce Fire and Rescue ladder company crew who showed her great respect and kindness when she was most vulnerable and the Lakewood police officer for his gentle words of reassurance. We greatly miss our parents and find comfort knowing they are together. Dorothy Elizabeth Anderson will be buried alongside her husband, William Haskell Anderson, of 67 years at Mountain View Funeral Home and Cemetery. A small graveside ceremony will be held on January 21, 2022 by invitation only.

Dorothy Elizabeth Mize was born August 29, 1925 in Salisbury, North Carolina and was the youngest of nine children. Her father, John, was a carpenter and mother, Alice, a homemaker. Having only brothers close her age, Dorothy was a rough and... View Obituary & Service Information

The family of Dorothy Elizabeth Anderson created this Life Tributes page to make it easy to share your memories.

Send flowers to the Anderson family.