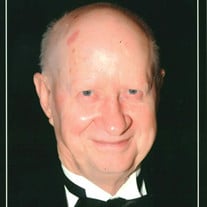 Donnie E. Thompson, 91, of Tacoma, Washington passed away peacefully on April 20, 2022. A man of many interests and talents, Donnie’s Native American heritage was incredibly important to him and he celebrated this heritage through storytelling. He retired from the US Army after an incredible 20 years of service, and had originally joined with his twin brother Johnny. Donnie loved trout fishing, dancing lessons with his wife Ingrid at Fred Astaire Dance Studio, and numerous family trips to Hawaii, Germany, Italy, Holland, and beyond. He worked for Tacoma City Light for over 20 years and was well-liked and respected by coworkers and those he trained there. Donnie was well-known for assisting his fellow meter readers who had issues with climbing hills and stairs. One of his many prized possessions was his Austin Healy Sprite: one that was blue, and one that was orange. He loved German food, especially when Ingrid would make it for him. Wiener Schnitzel was a particular favorite of his. Donnie is survived by his loving wife Ingrid, his three children Michael, Wolfgang, and Brigitte, his eight grandchildren Mary, Eva, Jacquelyn, Cameron, Michael, Douglas, Geneva, and Crystal, and his eleven great-grandchildren Kailey, Sienna, Michael, Elijah, Maslo, Jones, Maevyn, Jared, Ethan, Clayton, and Eli. He will be forever missed and loved by his family and all those who knew him.

Donnie E. Thompson, 91, of Tacoma, Washington passed away peacefully on April 20, 2022. A man of many interests and talents, Donnie&#8217;s Native American heritage was incredibly important to him and he celebrated this heritage through storytelling.... View Obituary & Service Information

The family of Donnie Elton Thompson created this Life Tributes page to make it easy to share your memories.

Send flowers to the Thompson family.