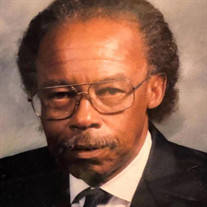 Don Hill, a Force of Nature, and long-time Tacoma resident, passed away on December 10, 2021. Born Donald Leonard Hill on February 5th, 1934, to Ethel Hill (nee Feidler) and Sam Hill. He was raised along side his younger brother Nathaniel, and came of age in Montgomery, AL. After graduating high school and attending a semester of college to pursue an interest in a law profession, Don enlisted in the US Navy. He served as a Gunners Mate loading fifty caliber shells into big guns on a destroyer and was stationed for a time in Okinawa, Japan. He ended his military career as a corpsman in the US Air Force, served for a time in Kodiak, AK, before being stationed at McChord AF base. After his military service, Don spent much of his professional career as a car lot owner and operator, a night club proprietor and a car salesman working on lots from Auburn, WA to San Diego, CA. Don married three times, and fathered four children including Natalie Yvette, whom he joins in Heaven. Don is survived by his cherished daughters Tonette Yvonne with whom he shared stories and laughter, and Shawn Colette with whom he often shared sandwiches and coffee, and his beloved son Dino Anthony with whom he shared joyful memories and who cared for him in his home the last six years of his life. Don is also survived by loving grandchildren, great grandsons, and a host of adoring friends. Throughout his life, Don loved dressing sharply and being the Life of the Party. He was a decent chess player, and a good pool player. He enjoyed watching professional football and learned to like watching professional soccer too, His big personality was accompanied by a quick wit, a bright smile, and a hearty laugh. He will be missed. He was loved.

Don Hill, a Force of Nature, and long-time Tacoma resident, passed away on December 10, 2021. Born Donald Leonard Hill on February 5th, 1934, to Ethel Hill (nee Feidler) and Sam Hill. He was raised along side his younger brother Nathaniel,... View Obituary & Service Information

The family of Donald L. Hill created this Life Tributes page to make it easy to share your memories.

Send flowers to the Hill family.