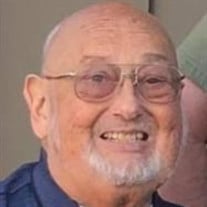 David Alan Stewart, 82, of Bothell, WA, passed away on 07.14.21 after a full and lengthy life. David was born on April 10, 1939, to Roger Claar Stewart and Pearl Othelia Hammer Stewart in Tacoma, WA. After graduating from Peninsula High School in 1957, Davidwent on to study Business at the University of Puget Sound, graduating in 1962. The month after graduation David married his life-long love and co-ed, Nancy Jo Roberts on July 28, 1962. David soon began as a Jr. Buyer in Procurement at the Boeing Company and daughter Carol Joy Stewart Jacob joined the happy couple in 1969. As Boeing receded in the early 1970’s David and Nancy started a new adventure in Richland, WA. A short-lived stay in Eastern Washington produced daughter Linda Marie Stewart Jones, a litter of Airedale puppies and a desire to head back to Western Washington. Returning to the Puget Sound proved fruitful for David as he started a career with Quinton Instrument Company and became a long-term resident of Shoreline, WA. David and Nancy joined Edmonds United Methodist Church and raised their family in a lovely community rich with PTA, Girl Scouts, Youth Groups, grandparents, and a family cabin on Benson Lake. Finishing his thesis and completing his master’s degree provided David a foundation for professional growth over the years as Quinton faced mergers and acquisitions and his tenure continued to grow. As a hobby, David was an avid model railroader, converting the finished basement into his personal railroad depicting Pacific Northwest scenery and railways in the HO scale. Losing Nancy in 1996 to a long-term illness was heart-breaking and a devastating blow to their celebrated empty nest plans. In a big picture sense however, it gave Davidthe opportunity to transition his career into a consulting business. In totality we suspect he retired four or five different times, with his final retirement in 2009. Over the past 10 plus years David enjoyed travel to Hawaii and locally around Washington State. A phenomenal trip to Disneyland with extended family-built layers of memories with three generations. Bringing David great joy was the family he built with Nancy and its growth over the last 20 years. Carol married Ken Jacob in 2007 and Linda married James Jones in 2009. His delight was the birth of Madison Grace Jacob in 2009 and Kaden Christopher Jacob in 2011. Liam James Jones joined the family in 2012 at the age of 3. Anyone who knew David knew he was most fond of Airedale Terriers, the king of terriers. A novice trainer and handler, David enjoyed the breed for its feisty personality and loyal constitution. His latest Airedale, Rowdy Rue, is sorrowful at David’s passing. Rowdy will remain with Jim, Linda, and Liam. Preceded in death: Parents Roger and Pearl Stewart, Wife Nancy Jo Stewart, Brother Roger (Betty) Stewart, Surviving: Daughters: Carol (Ken) Jacob, Linda (James) Jones, Grandchildren: Madison and Kaden Jacob, Liam Jones The family requests remembrances be made to Providence Hospice. There will be a graveside service at Mountain View Funeral Home.

David Alan Stewart, 82, of Bothell, WA, passed away on 07.14.21 after a full and lengthy life. David was born on April 10, 1939, to Roger Claar Stewart and Pearl Othelia Hammer Stewart in Tacoma, WA. After graduating from Peninsula High School... View Obituary & Service Information

The family of David Alan Stewart created this Life Tributes page to make it easy to share your memories.

Send flowers to the Stewart family.