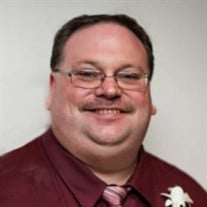 Because it was Friday and the field lights were on, God needed a lineman, and his memory will live on. ‘Coach’ Darin James Sauer lovingly referred to as Bubba has passed away on July 30th. Born in Kenosha, Wisconsin to parents Fred and Mary who passed several years ago. Darin now joins them in the presence of the Lord. He leaves behind his soulmate and wife Beverly, his adopted son's Nick and Zack, his beloved brother Dave and several very special nieces and nephews, and many cousins and aunts and uncles, whom have always been so very dear to him. He was the “Funcle,like a dad only cooler.” He was so proud to be the Funcle, he even proudly wore a shirt with the title. Darin was a loving, caring, selfless person who strived to love his family and friends deeply. He showed up when he was needed and always took care of everything for those he cared about. His kind soul is at rest, but his place on this earth impacted everyone he touched. Darin spent most of his life in Wisconsin, but moved west 12 years ago. His connections span across the miles with deep love and affection for all of those he touched. His passion for coaching football, was and extension of his love and loyalty to the game, to the Chicago Bears and to the teams he built around him. He was always watching a game, and when he wasn’t, he was reading about the NFL or researching for his fantasy teams. He lived his life with integrity, grace and humility, everything he did he did with kindness and compassion for the world around him. He carried out his life with unwavering strength and devotion to his family, his friends, his Co workers and to humanity . FAITH. FAMILY. FOOTBALL. A celebration to honor Darin's life will be held on August 8th at 3pm at: Mountainview Funeral Home in Tacoma Washington, followed by formal private services and internment in Wisconsin at a later date to be determined. Bear Down

Because it was Friday and the field lights were on, God needed a lineman, and his memory will live on. &#8216;Coach&#8217; Darin James Sauer lovingly referred to as Bubba has passed away on July 30th. Born in Kenosha, Wisconsin to parents... View Obituary & Service Information

The family of Darin Sauer created this Life Tributes page to make it easy to share your memories.

Because it was Friday and the field lights were on, God needed...

Send flowers to the Sauer family.