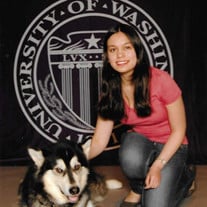 On July 19th, Christina Theresa Paz, unexpectedly and tragically passed away in her Kirkland home. She was only 29 years young and just beginning her exciting and productive life. She is survived by her heartbroken and stunned parents Robert and Rita Paz, Grandmother Andela Kelemanik, Aunt Laura Bartholdt, Aunt Maria Paz, Uncles Edward Paz and James Paz, Alexander Paz Hart, her cousin, and her beloved bunny, Blu. She studied hard to achieve her career goals and enjoyed life by spending time with her family and wonderful friends, and by traveling and hiking extensively. After graduating from Federal Way Senior High as Valedictorian in 2010, she attended the University of Washington. She graduated from the UW in 2014 with a Bachelor of Science in Materials Science and Engineering, with honors in Nanoscience and Molecular Engineering. All those summers at math camp really paid off. She began her engineering career in 2014 with Crane Aerospace & Electronics, earning several Crane Excellence Awards. At the same time she was mentoring engineering students and interns and was a member of the Eastside Rotaract Club, volunteering at the New Bethlehem Day Center which helps homeless families. In January 2021, Christina was excited to begin a new job as a Quality Engineer at Physio-Control, now part of Stryker. She was just getting into her stride when fate decided to send her to God. Christina was greatly loved by her family and will be sorely missed. The funeral mass for Christina Paz will be on Wednesday, August 4, 2021, 11:00 a.m. at St. Vincent de Paul Parish, 30525 8th Ave South, Federal Way, WA 98003. Viewing will be available at 10 a.m. The mass is open to anyone who would like to attend. The family wishes to hold a private graveside service following the mass at Mountain View Funeral Home Memorial Park. If you would like to commemorate Christina's life and friendship, you can Make a Gift to the Woodlawn Park Zoo at www.zoo.org in tribute to Christin

On July 19th, Christina Theresa Paz, unexpectedly and tragically passed away in her Kirkland home. She was only 29 years young and just beginning her exciting and productive life. She is survived by her heartbroken and stunned parents Robert... View Obituary & Service Information

The family of Christina Theresa Paz created this Life Tributes page to make it easy to share your memories.

Send flowers to the Paz family.