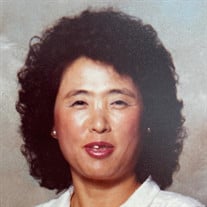 Sister Chong Mal Im Martin was born January 2d, 1939, to the late Chong Chon Rim (Father) and the late Chi Pil Nam (Mother) of Songju-kun, Republic of Korea. She was one of ten children born to this union, four of whom are deceased. Chong’s surviving siblings are Brother Chong Jae Hong, Brother Chong Jae Soo, Brother Chong Jae Chull, Sister Chung Jea Im and Sister Chong Jae Num. Chong grew up and attended school in the Republic of Korea. She became a dining facility worker for the United States Army at Camp Henry, Republic of Korea, where she met her husband-to-be, Jerome Martin. In March of 1971, she was united in holy matrimony to Jerome. To this union two children were born. On February 20th, 1972, son Donald Jerome Martin was born. On December 13th, 1976, son Michael Jerome Martin was born. While stationed at Fort Campbell, Kentucky, during the period September 1980 through January 1984, Chong and Jerome became faithful to the Lord, attending the Eagle Support Brigade Chapel, a wooden World War II chapel building. At the end of January 1984, Chong and her family moved to Schofield Barracks on the island of Oahu, in Hawaii. There her family attended the 25th Infantry Division Support Command Chapel, another wooden World War II chapel building. Seeing the bare ground around the chapel, Chong bought and planted flowers wherever she could fit them in. Her ability in selecting and growing flowers and plants resulted in their government quarters being selected “Yard of the Month”. While in Hawaii, Chong became a citizen of the United States of America, ready to have her say in the ballot. In February 1987, Chong and her family left Hawaii and came to Fort Lewis, Washington, where they attended the 9th Infantry Division Support Command Chapel. Once again, a wooden World War II chapel building. After Chong’s husband Jerome retired from the Army, they bought a motor home and did a lot of traveling. One of Chong’s favorite places to visit was Disneyland, which they visited every few years. Those trips always led to visits to Las Vegas for a couple of shows and then, up the map to Fallon, Nevada to visit Jerome’s brother – like Jerome, a Vietnam War vet. In 2005 Chong and Jerome decided to go to Washington, D.C., to see what she had to learn about in preparation to become a U.S. citizen. While there, they added a trip to Niagara Falls, New York. When not on a long trip during the summer months, they were always on shorter trips around the Northwest. After a while Chong became disenchanted with some of her fellow church members, so she and Jerome arrived at the Good Hope Church of God in Christ, in Tacoma WA. On the morning of August 9th, 2021, Chong Mal Im Martin passed away. Chong leaves to cherish her memories, her husband: Jerome Martin of Tacoma, WA; her two children; Donald Martin of Parkland, WA and Michael Martin, of Tacoma, WA; four grandchildren (Zak, Kayla, Colin and Bradley); and a host of friends and relatives. A link to a live webcast of Chong's service is available below. The webcast can be viewed live or recorded for 90 days after the service. Family and friends are also welcome to purchase physical copies of the service recording using the link below. http://webcast.funeralvue.com/events/viewer/58792/hash:AF23F1BFDBD87CD9

Sister Chong Mal Im Martin was born January 2d, 1939, to the late Chong Chon Rim (Father) and the late Chi Pil Nam (Mother) of Songju-kun, Republic of Korea. She was one of ten children born to this union, four of whom are deceased. Chong&#8217;s... View Obituary & Service Information

The family of Chong Mal Im Martin created this Life Tributes page to make it easy to share your memories.

Send flowers to the Martin family.