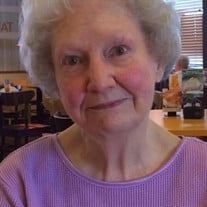 Carleen Luell Newport, 90, passed on May 12, 2022 in Tacoma , Washington. Carleen Luell Newport was born in Tulsa, Oklahoma, March 19, 1932 to Hester Irene Chaney Crow and Carl C Crow, Sr. She lived in Tulsa until her marriage at 17 to James “Malcolm” Newport on October 15, 1949. Carleen was proud to be a mother to her four “blessings” while supporting her husband’s Naval career. She lived in Oklahoma, Arkansas, Louisiana, California, Texas, Japan, California and moved to Tacoma, Washington in 2017 to be closer to her children. She babysat many children so she could work from home. She enjoyed baking, cooking, and watching her soap operas. Later in life, she adored her grandchildren and admired the flower garden at her Pacific Northwest home. She expressed her Christian faith by loving all those she met. And all those she met, could not help but love her, too. Carleen was a member of Beaver Street Baptist Church in Jenks, OK. Carleen was preceded in death by her husband, James Malcolm Newport, her father, Carl Crow , Sr., her mother, Irene Jackson, her brother Carl Crow, Jr., her sister Geraldine Baker, and her grandson, Christopher James Newport. Survived by sister, Betty Pereff of Tulsa, OK, sons Paul “Tom” Newport of Alpine, CA and Mark R. Newport of University Place, WA, daughters Liz Harris and husband Mike Harris of Spanaway, WA and Anita Newport of Tacoma, WA. Grandchildren Matthew and Sarah Newport of Tacoma, WA, Melanie Newport and Arnold Kim of West Hartford, CT, James Harris of Spanaway, WA, Kaitlyn and Cyle Bendewald of Ashley, ND. Great grandchildren: Gwendolyn, Ellaina and Malcolm Newport of Tacoma, WA. And numerous nieces and nephews. A memorial service will be held on June 22, 2022 at Life Center, Central Campus , Tacoma in Gray Chapel at 2:00pm. In lieu of flowers, donations may be made to her favorite charity, St. Jude Children’s Hospital. At a later date, Carleen will be laid to rest in Fletcher, Oklahoma with her husband.

Carleen Luell Newport, 90, passed on May 12, 2022 in Tacoma , Washington. Carleen Luell Newport was born in Tulsa, Oklahoma, March 19, 1932 to Hester Irene Chaney Crow and Carl C Crow, Sr. She lived in Tulsa until her marriage at 17 to James... View Obituary & Service Information

The family of Carleen L. Newport created this Life Tributes page to make it easy to share your memories.

Send flowers to the Newport family.