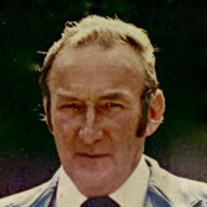 Bill (Wilfred) R. Runyan of Tacoma, WA passed away peacefully at his home on Wednesday, April 6, 2022, at the age of 91. Bill was born on February 22, 1931, in Tacoma, WA, to parents Frederick Cleveland Runyan and Geneva Alexander Wheeler. He was employed as a truck driver for 47 years by Western Farmers Association, which became Cenex, which became Land O Lakes. His final years of employment were with Fors Farms, from which he retired in 1997. He enjoyed interacting with the farmers to which he delivered bulk feed. He also enjoyed the solitude of his driving. However, his main focus was his family, to which he and his wife of 62 years, Carol, devoted their lives. They built their home themselves, on five wooded acres near where he grew up. They paid for it as they built, never going into debt. He worked hard all of his life, and he instilled a strong work ethic in his children. Saturday was always, “workday.” This meant cutting brush, setting fenceposts, or working on the house. He enjoyed working on his tree farm near Orting and did all of the mechanical work on the bulldozers he owned. He rode his bike every day until he was 90. Bill and Carol had seven children: Jim; Mike (who died in 2005, survived by wife, Beth); Ken (Kim); Billy Lee (who died in infancy); Carol Meyer (Walt); Bill D. (Teresa), and Doug (Sue). In addition to his sons and daughter, he is survived by nine. grandchildren, twelve great-grandchildren, and his brother, Harold J. (Jim) Runyan. He was predeceased by his wife, Carol, sons Mike and Billy Lee, his brothers Kenneth Beck and Robert Beck, grand-daughter Melissa Stuen, and great grandson, Landon Mertens. He will be laid to rest on Sunday, April 24th at 1pm at Mountain View Funeral Home. Viewing hours will be from 12pm to 5pm on Saturday, April 23rd.

Bill (Wilfred) R. Runyan of Tacoma, WA passed away peacefully at his home on Wednesday, April 6, 2022, at the age of 91. Bill was born on February 22, 1931, in Tacoma, WA, to parents Frederick Cleveland Runyan and Geneva Alexander Wheeler. He... View Obituary & Service Information

The family of Bill R. Runyan created this Life Tributes page to make it easy to share your memories.

Send flowers to the Runyan family.