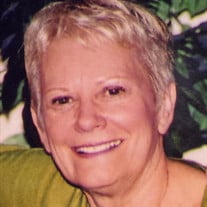 Barbara L Little Harris 08/30/1938 - 09/20/2021 Tacoma Washington Barb was born in Tacoma Washington, raised by parents James and Lois Sand in Fircrest. She attended Wainwright Elementary, Jason Lee Jr High, and Stadium High (class of 1956). She married William Reel and had 3 children, then married the love of her life Hank (Carl) Little and had one child. They had the most loving, wonderful marriage for 36 years until Hanks passing in 2000. In 2005 she reunited with her childhood sweetheart Pete Harris and married in 2006. She lovingly took care of Pete for 4 years while in a nursing home until he passed in 2010. She always thought it was a beautiful love story of their reuniting and would share it with anyone she met. Barb loved country music, a passion she shared with Hank playing in country bands through the years. She played the bass and anyone who heard her sing Crazy by Patsy Cline thought she sounded just like her. After Hank died she continued to play music with friend and band mate Donn Allard. Music was the joy of her life. She also enjoyed going to Emerald Queen gambling with her long time best friend Bettye Echert and husband Tom. They enjoyed many trips to Reno also. Barbs family was the most important thing in her life, and she was so loved by them! After many health problems at the end, she was surrounded by many loved ones by her side as she passed. A very special thank you to granddaughter Nikki who was her advocate and did so much to make sure things were taken care of. She appreciated her so much. Proceeded in death by daughter Kathy Reel. Survived by children Renee (Lloyd) Detterich, Randy Reel, Jaimie (Rob) Horn, Step children Sherry (Wes) Pierson, Cathy (Steve) Barringer, Diana (Barry) Martin Grandchildren Nikki Slater, Joshua (Cassie) Slater, Jake Slater, Dixie Horn, Jesse Bacorn, Beth (Izzy) Chase, David Detterich, Stephanie Prosser, Great grandchildren Alexis (Norm) Carpenter, Tyrik Mason, Jaxson Mason Slater, Nova Slater, Rayne Slater, Clayton Horn, Charli Prosser, Abby Detterich, Evan Detterich, Autumn Detterich. Great Great Grandchild Olivia Carpenter She fought a hard 4 month battle she just couldn’t overcome. She will be met for her new journey by her husbands Hank and Pete, daughter Kathy and her parents James and Lois. “Somewhere Just Beyond The Moon”. Funeral will be held on Friday October 1st, 2021 at 1 pm at Mountain View Funeral Home 4100 Steilicoom Blvd SW, Lakewood Washington http://webcast.funeralvue.com/events/viewer/61371

The family of Barbara L Little Harris created this Life Tributes page to make it easy to share your memories.