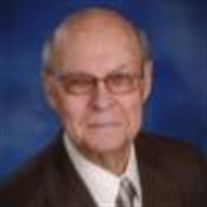 Arthur Henry Larsen, born in Maywood Illinois to Sverre and Laura Larsen on January 5th, 1932 and passed away on April 1, 2022 at the age of 90. After Art graduated from high school in 1949, he and his mother moved to Tacoma to be closer to his sister Ragna and her family who lived in Seattle. Shortly after their move, he got a job at Rhodes Brothers department store where he met the love of his life Doris Paulson. They were married Feb 2, 1952. Doris passed away May 5th, 2017 after 65 wonderful years of marriage. Art made a career change in 1952 securing a job with Servomation Vending Company where he started at the bottom of the ladder, and worked his way up to managing the shop. He finally retired 40 years later at age 62. Art was proud of his union affiliation and the pension it provided Doris and him to live comfortably. He also spent 8 years serving his country in the Naval Reserves even though he was susceptible to motion sickness. Art and Doris were active members of St Mark's Lutheran Church for 50+ years. Singing came easy to Art and he was truly gifted. He sang in the church choir, was often requested to sing at weddings, including his two daughters, and he sang at many church members' funerals. He was also recruited by the choir director to be a member of the PLU Choral Union Choir. He sang with them for several years until a broken ankle forced him to quit just prior to a national tour. To say the least, he was heartbroken. With a group of close knit church friends, Art was a founding member of the “Five Turkeys Construction Company”. These five men took on many church construction projects, grounds maintenance, and anything else that needed their expertise. They helped each other and other church members with personal projects at their homes and had a great time doing it all together. In his younger years as a father, the local cub scout packs Cub Master stepped down. With the risk of the pack dissolving, Art stepped up and took over as the new Cub Master. He maintained that position until his son finished his involvement and a new Cub Master was secured. In his later years as a father, he was always available to his children and grandchildren. He was there for a ride to school, work, or doctor's appointment. He was their personal driver's ed instructor and always had an open wallet if you were in need. Helping others gave him purpose. Art was an avid sports fan. Hardly a day would go by without the Golf Channel on TV. He loved watching the Mariners and Seahawks games. Most of all, he was the biggest fan of his children’s and grandchildren's many sporting events. He rarely missed an opportunity to cheer them on. He is survived by his three children, Cyndi Villegas (Dan), Steve Larsen (Jan) and Dana Larsen (Ron) and his grandchildren, Braden, Britta, Luke, Leah, Amelia, and Levi, as well as nieces and nephews. A memorial service will be held on Saturday, May 7th, 2pm, at St Mark's Lutheran Church 6730 N 17th St, Tacoma, WA 98406.

Arthur Henry Larsen, born in Maywood Illinois to Sverre and Laura Larsen on January 5th, 1932 and passed away on April 1, 2022 at the age of 90. After Art graduated from high school in 1949, he and his mother moved to Tacoma to be closer to... View Obituary & Service Information

The family of Arthur Henry Larsen created this Life Tributes page to make it easy to share your memories.

Send flowers to the Larsen family.