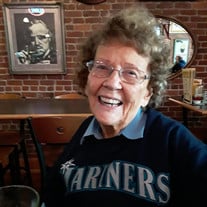 Ann Bell Emerson was born in Kingfisher, Oklahoma on December 24, 1922. Mom passed to be with her Lord Jesus on December 14, 2021. Mom was lying in her own bed in her home of 73 years. Mom’s goal when she passed was to live long enough to make it to her 99th Birthday Party and be with her Sons and their families. Mom came to California when she got out of High School. Mom told us that she told Grandpa Edwards that either he paid for her bus ticket or she would hitch hike. Mom was working as a short order cook when she met our father Robert Thomas. They were married while Dad was in the Army. Mom worked for a time at Macdonald Douglas as a riveter on the Douglas A-20G Havoc Bomber. Because she was such a small woman, she could get into the fuselage and back up the riveter. After the war they moved to Dad’s home town Tacoma, Washington Dad passed on April 1, 1972, he is survived by his Brother Fred Griffiths and our cousins Don, Sue and Jim. Some time later Mom met and married Frank Emerson. Frank passed April 27, 2011 and is survived by his daughters Willie and Karen. Mom is survived by three sons: Glen (Shirley), Charlie (Missi), Rob (Nancy). Grand Children: Curtis (Donna), Holly (Glen), Carrie (Scott), Christopher (Angela), Kristen (Ken), Elizabeth, Orlonda and Frank (Jessie). Great Grandchildren: Andrew (Felicia), Meagan (Garrett), Nikolas, Ceira, Bronwyn, Brian, Daylon (Brittney), Forest, Ash, Fox, Cameron and Tristan. Great Great Grandchildren: Mia, Trinity, Axel, Kingsley, Luna and Elora. Mom was the third child born of thirteen in the Edwards family. She was preceded in death by her father Charles and her mother Johnny, J.R., Jeff, Don, Maydene, Jim and Toby. Mom is survived by George, Charlene, Harry, Leon and Lucky. Mom is also survived by all the wonderful stories from her childhood on the farm in Oklahoma and the adventures she had with her brothers and sisters. We will never forget them Or her.

Ann Bell Emerson was born in Kingfisher, Oklahoma on December 24, 1922. Mom passed to be with her Lord Jesus on December 14, 2021. Mom was lying in her own bed in her home of 73 years. Mom&#8217;s goal when she passed was to live long enough... View Obituary & Service Information

The family of Ann B. Emerson created this Life Tributes page to make it easy to share your memories.

Ann Bell Emerson was born in Kingfisher, Oklahoma on December...

Send flowers to the Emerson family.