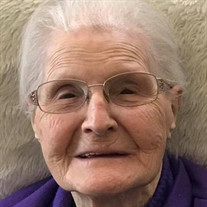 Angela B. (Meier) Gnirk found her way home and into Heaven’s arms, peacefully on Saturday, July 31, 2021, at the tender age of 103. Born in a two-story farmhouse to Leo and Clara Meier, on November 15, 1917, in Crofton, Nebraska, Angela would later go on to marry, Harvey Gnirk, and together they moved to Tacoma, Washington, where they would go on to raise their large family of 13. Angela the ever-caring soul, full of grace, and calm guidance, would go on to take care of anyone who crossed her doorsteps, even helping to raise more than a few of her grandchildren, and becoming grandma to countless more. Angela was a loving wife, mom, grandma, and friend. She taught her family love, acceptance, and forgiveness. Angela gave and gave to those around her. She served as a volunteer for Head Start, Campfire Girls, Girl Scouts, and a Junior Bowling League. She was an avid member of an adult bowling league, the VFW, the Women’s Auxiliary Club, and the Military Order of the Cootie. Angela firmly believed in the power of prayer, not only walking to Church every Sunday, but praying the Rosary each night. Angela was greeted at the almighty gates of the Lord by her parents, her brothers and sisters, her husband, and her children, Terry, Randall, Dennis, Kenny, Craig, Donna, June, Rosalie, and Jon, as well as some of her grandchildren, who proceeded her in death and helped to guide her home. Angela’s surviving children, Connie, Marietta, Gail, Guy, and Michelle, along with her numerous grandchildren, great grandchildren, great-great grandchildren, and pseudo grandchildren carry forward the seemly endless magic she weaved in each of their memories of her unrelenting love and care. Her legacy lives on in the hearts, love, and laughter of her family, friends, and countless others who have been fortunate enough to have ever cross her doorstep. May her eternal rest be celebrated together. Viewing to be held on August 11, 2021 at Mt. View Funeral Home, from 10am to 8pm. Rosary to be held at Visitation Church on August 12, 2021 at 11:30am, with Mass following at Noon Graveside service to be held at Mt. View Funeral Home at 1:30pm Reception to follow at her Granddaughter Donna's home

The family of Angela B Gnirk created this Life Tributes page to make it easy to share your memories.

Angela B. (Meier) Gnirk found her way home and into Heaven’s...

Send flowers to the Gnirk family.